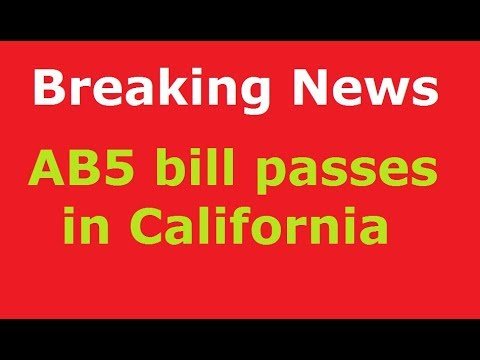 California’s disastrous anti-freelancing bill, AB5, went into effect January 1, 2020 and is already having a detrimental effect on the state’s freelance court reporters and agencies. One such agency, Diamond Court Reporting, has filed suit against the state.

In a nutshell, AB5 creates a presumption that any person providing their labor or services to a company for remuneration is an employee.

Asm. Lorena Gonzalez, the bill’s author, claims that the law was intended to codify the Dynamex decision, referring to a California Supreme Court case regarding truck drivers who had been employees but were then transitioned to independent contractor status. Two of the affected drivers decided they’d rather go back to employee status and filed a misclassification suit against the company. In ruling against Dynamex, the California Supreme Court set out an “A, B, C” standard to determine if a worker is an independent contractor or should be an employee. To qualify for independent contractor status, all of the following parts must be met:

AB5 goes a bit further, though. Prior to AB5, any tests to determine whether someone was an independent contractor or an employee did not apply to people whose positions or professions were not controlled by “wage orders.” Court reporters, as professionals licensed by a state board, were not controlled by wage orders. Under AB5 anyone earning even one dollar in the state and whose line of work isn’t specifically exempted must be able to pass the A, B, C test. Lawyers are exempted, but court reporters, translators, and interpreters – who frequently work on-demand - are not.

That is a pretty big problem for Diamond Court Reporting.

Multiple industry groups have filed suit against the state on behalf of the professions they represent, but the case of Diamond Court Reporting is a little different in that the court reporting firm holds eight contracts with various state and federal government departments to provide on-demand court reporting services. Many of their contracts require them to provide statewide coverage, and in a state as large as California, they argue, there is no way they can provide that service in the manner needed by the government agencies without maintaining a list of independent contractor court reporters they can engage on a job-by-job basis.Should their client be in the position of prosecuting or fining them for not complying with an impossible-to-comply-with law?

In their Complaint for Declaratory Relief, they describe the irreconcilable conflict:

“[N]o express exemption is provided for a court‐reporting business such as Plaintiff’s to retain licensed professional California Court Reporters (CSRs) on an individual, on-demand, single matter basis, and therefore Plaintiff is presently and immediately threatened with prosecution in a civil action against Plaintiff as the putative employer by said Defendants for purported misclassification of Plaintiff’s independently contracted CSRs as an independent contractor.”

The Complaint states that compliance with the law as presently constituted prevents Plaintiff from being able to perform the contracted services, effectively causing them to breach the contract. So, they’re forced to choose between a breach of contract suit or being sued by the state for misclassification. That’s quite a conflict.

Additionally, since many other state board licensed professionals are exempted, Diamond Court Reporting claims that court reporters as a class of professionals are treated disparately and with no rational basis for that treatment.
Finally, the Plaintiff argues that the new law burdens them with new obligations that other similar professions don’t face, and that such treatment is “arbitrary, irrational, and capricious,” thereby violating the Equal Protection Clause of the United States Constitution.

As of this writing, there is no legal challenge to the law on behalf of court reporters as a whole.