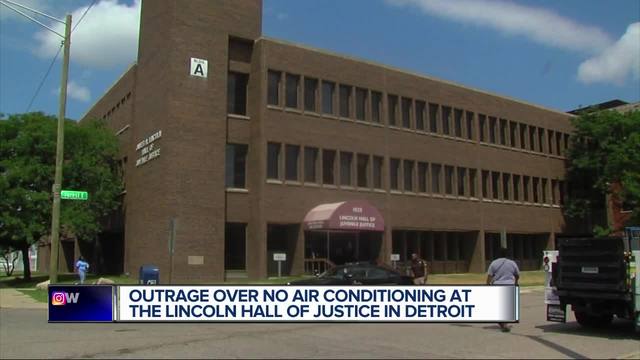 A thunderstorm knocked out electricity to the Lincoln Hall of Justice, and a massive generator was brought in to run the lights. Portable "chiller" units were brought in to provide air conditioning, but they didn't work. It was so hot inside the building that children who were being transported to the courthouse for hearings had to wait for hours in air-conditioned vans in the parking lot because the holding cells were too hot.

County officials had no solution except to cancel court the next day. One fed-up judge took to Facebook to vent her frustrations, pointing out that in addition to the disservice cancelation does to the public, it doesn't help the hundreds of employees who were still expected to work in the sweltering building. She wrote:

"It is a shame that we have to continue to work in these conditions. It is even more shameful that we ask the public to come to court and sit in crowded hallways of a terrible building with no air.

"The remedy: we can cancel our dockets. But how does this serve the public? My clerk can't leave, my sheriff can't leave, my court reporter can't leave. And more importantly, the people who have cases today would be unfairly disadvantaged b/c they have made their way to the court only to find out that the judge canceled the docket because it was too hot. People want their kids returned to their care, their kids released from placement, a chance to address bond, they want their cases heard."

Unfortunately, fixing the air conditioning won't solve the problem. Court staff say the building has major electrical issues, is in disrepair, and the county has no plans to renovate or move to a different building. After the judge's social media posts, though, it wouldn't be surprising if the condition of court facilities or access to justice for all residents of Detroit becomes a big local issue.