Who Owns a Court Reporter's Notes 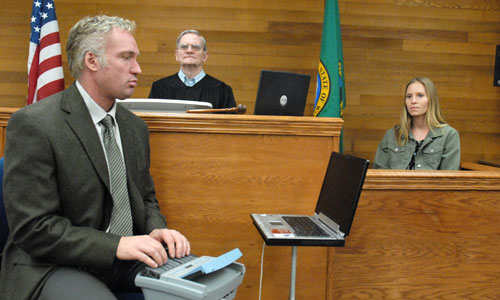 Are Court Reporters Obligated to Provide an Audio Backup?

As we know, a deposition transcript captures the proceedings verbatim. What it can't capture is the attorney's or witness's tone of voice, or whether a participant is laughing, or crying. Most of the time that doesn't really matter, but in an especially contentious case,  those types of issues can be relevant. In such cases attorneys sometimes request any audio backup the court reporter may have available.

Which brings us to the question: Are attorneys entitled to receive a copy of backup audio media?

The short answer is, no. The official record of the deposition is the transcript, and court reporters (or court reporting firms) are not obligated to release backup audio media. If there is a request for the audio and the firm decides to grant it, the National Court Reporters Association has developed guidelines for doing so:

1.      If the backup audio media is made available to any party in a case, it is the responsibility of the reporter to ensure that no confidential or off-the-record discussions are contained in the released recording.

2.      A reporting firm/agency may not require that a reporter produce the backup audio media (unless ordered to do so by a court).

3.      If the reporter decides to release the backup audio media, the reporter shall release a copy and not the original (unless ordered otherwise by a court).

4.      If the reporter makes available a copy of the backup audio media to one party, the same offer must be made to the other party(ies) to the proceeding.

6.      If a reporter uses backup audio media, it should be preserved upon request by any party to the proceeding for the same period of time for which the reporter’s notes are preserved. The reporter may request that the party seek a court order before making it available.

If an attorney anticipates wanting an audio recording of a particular deposition, they can create their own - provided they've followed the applicable Rules of Civil Procedure in that jurisdiction.